….We’re not in Kansas anymore….

At least, that’s what you would think after reading Wiki:

“The Bluff is a district within the area that is infamous throughout metro Atlanta for the availability of drugs, heroin in particular.

The borders of The Bluff are defined differently by different sources. For example the Atlanta Journal-Constitution and Creative Loafing both defined The Bluff as including all of English Avenue and Vine City. However, a more recent and in-depth December 2011 series of reports by 11 Alive TV news, referred to The Bluff as a “section of English Avenue”. The English Avenue/Vine City area has some of the highest poverty and crime rates in the city, with the Carter St. area surrounding the Vine City MARTA station ranking in 2010 as the #1 most dangerous neighborhood in Atlanta and #5 in the United States.”

Who would want to LIVE here?

… Apparently, MANY. Not only the long time residence fighting for the redevelopment of this area, but also the many investors who dropped a boat load of money in the area trying to flip houses across from the Georgia Dome and Georgia World Congress Center…..There HAD to be some special plans for this area at once-something special.  Who would spend this amount of money developing such a beautiful building knowing it’s patrons would have to tip-toe from Marta across the street, past the drug house, robbers and pan handlers?

I’m not saying its not lacking their share of revitalization, nor is it crimeless- and yes, it could be dangerous if you are walking down the street at 1am texting on an IPhone, carrying a laptop bag and sporting an “I LOVE NY” T-Shirt- yes, you could be calling for some trouble. HOWEVER, as a person 5’1 (barely) and 110lbs- I have never feared kicking in a vacant house to take a home tour.

But why the bad rap? Where did it come from? What’s the history of this community?

“What is now the English Avenue neighborhood was purchased in 1891 by James W. English, Jr., son of Atlanta mayor James W. English. It was developed as a white working-class neighborhood. Simpson Road was long a residential race barrier with whites to the north and blacks to the south.Today’s English Avenue was known at different times as Bellwoodand as Western Heights (I like this name!) . In 1910 the Western Heights school (later renamed Kingbery after a principal of the school, then renamed English Avenue Elementary School) was built at the northeast corner of English Ave. and Pelham St

The area south of Simpson Road — today’s Vine City — was settled at the end of the 1800s by large land owners, and a predominantly African-American residential area was established, though there were also white subdivisions, schools, and churches. A mix of social classes were present. In 1910 Alonzo F. Herndon, founder of the Atlanta Life Insurance Company, built his home at 587 University Place, now listed on the National Register and open to visitors

During the mid-20th century, the area was a middle-class African-American neighborhood.Commercial areas included English Avenue; Simpson Street/Road, in its heyday in the 1950s and 1960s; and Bankhead Highway, which was part of the US Highway system, and was in its splendor in the 1960s. Dr. Martin Luther King Jr. moved to the area in 1967, and his widow Coretta Scott King continued to live here until her death.

Suburbanization started draining the area’s vitality starting in the 1970s.Over the following decades, it attracted buyers and sellers of heroin, and deteriorated into a corner of poverty in the city, characterized by large numbers of abandoned, boarded-up houses.”

Will Wal-Mart aid in the revitalization of this community? I don’t think Wal-Mart had a clue about the possibilities and  impact their opening could make. They may have only viewed their bottom line and were offered  benefits to open here. But if they cared, Wal-Mart can be the a major player in the redevelopment of this area now dubbed a “food desert” .

Here’s a history of the revitalization efforts:

“In 1999, the Atlanta Housing Authority first announced plans for the “Historic Westside Village”, a $130 million commercial, residential and retail project at the area’s southern end near Martin Luther King, Jr. Dr. at Ashby St. A Publix supermarket opened in May 2002but the overall project stalled by 2003 as further anchor tenants did not materialize. This, along with disappointing sales, caused the Publix – the only full-sized supermarket for miles around – to close in December 2009.Creative Loafing called the project the most notorious “municipal boondoggle…to have tarred Atlanta” during mayor Bill Campbell‘s era; the project “fell victim to…cronyism, bureaucratic incompetence and a flagrant disregard for federal lending guidelines”.In December 2010 things looked up as the Atlanta Development Authority announced plans for Wal-Mart to open a store on the site.”

Yikes. Now putting all that aside, I know you did NOT come here for a history lesson. However, I believe it’s imperative to know the history and direction of the community you plan to invest.  Understanding this could help your decision.  When you purchase, you invest more than money- you invest a part of you.

What’s left to buy in The Bluff?

Right now, as an investor I’d buy a few to hold (of course rent them, because vacant homes do nothing for communities).

IF you can find any. Many of these homes have already been hit by the bust- and have been resold as REO’s/ Foreclosures between the years 2007-2011.. it’s pretty quiet now with new listings- but that does not mean these homes are occupied and not available.  I have found a few come up- off line – or off the MLS grid as investors trade packages or “owner finance” homes directly on Craigs List and other By Owner sites. Keep an eye out- some investors may be ready to dump since the revitalization is not happening as rapidly as they need and can no longer afford to hold. Other circumstances, such as the new vacancy registry and a code enforcement crack down (after the urging of the community) are forcing these MIA investors to pay upon registration or repair and rent their homes. I also know a few investors with portfolios that maybe ready to release.

The bottom line- there are still deals in this area. 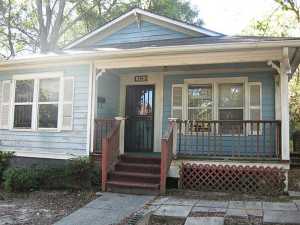 P.S. Have you seen the movie “Snow  on tha Bluff”?? I tried but my ears are sensitive LOL.. too much “realness” for me..